24/01/18 The Lord Provost was invited to the Junior Chamber International AGM and met L-R Danielle Grieve (Scottish national JCI President), Myles Edwards who was invited to give a talk to the JCI about his Charity Gathimba Edwards Foundation in Kenya, Elaine Cleary, Aberdeen President JCI and James Reid, Aberdeen Vice president. 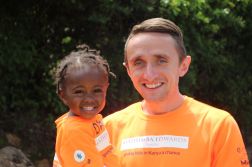 As Lord Provost of Aberdeen I am also the Lord-Lieutenant, which means I am Her Majesty The Queen’s first representative within the city boundary. My principal duty is to represent the Crown within the Lieutenancy area and to uphold its dignity. This includes facilitating Royal visits, promoting the Honours system and liaising with the armed forces.

Recently, it has meant that I have had the huge honour of nominating someone from Aberdeen to attend the forthcoming wedding of Prince Harry and Meghan Markle. The soon-to-be-married couple asked that the people nominated should be from a broad range of backgrounds and ages; including young people, who have shown strong leadership, and those who have served their communities.

I nominated Aberdonian Myles Edwards, the founder of Gathimba Edwards Foundation, and I am delighted to say that he is one of 1,200 members of the public, from every corner of the United Kingdom, nominated by nine regional Lord Lieutenant Offices, who will be part of the Royal wedding celebrations, at Windsor Castle on Saturday 19 May.

I first met Myles at the Junior Chamber International AGM in Aberdeen last year, when Myles was invited to give a presentation on the Gathimba Edwards Foundation, the charity he founded to give children in Kenya a chance. I was immediately struck by his engaging manner, leadership skills and his charitable endeavours.

With numerous projects across Kenya the Gathimba Edwards Foundation aims to help disadvantaged children get a start in life, whether it be support through shelter, clothing, education or sustainable food solutions and giving them the opportunity to not only live their lives as children but also to develop as adults. It also provides counselling and seminars on a wide range of topics for families it supports.

Through his charitable endeavours Myles gives so much to others that his nomination is a token of our appreciation for the work he and his charity does. He’s a wonderful ambassador for Aberdeen and a great example to us all.

Gathimba Edwards Foundation is a charity registered in Scotland. To find out more visit www.gathimbaedwardsfoundation.org/

The second photograph is of Myles Edwards and his gorgeous daughter Dahlia.